Some illustrations for this project¶

Here are some plots illustrating the performances of the different policies implemented in this project, against various problems (with Bernoulli arms only):

Histogram of regrets at the end of some simulations¶

On a simple Bernoulli problem, we can compare 16 different algorithms (on a short horizon and a small number of repetitions, just as an example). If we plot the distribution of the regret at the end of each experiment, R_T, we can see this kind of plot: 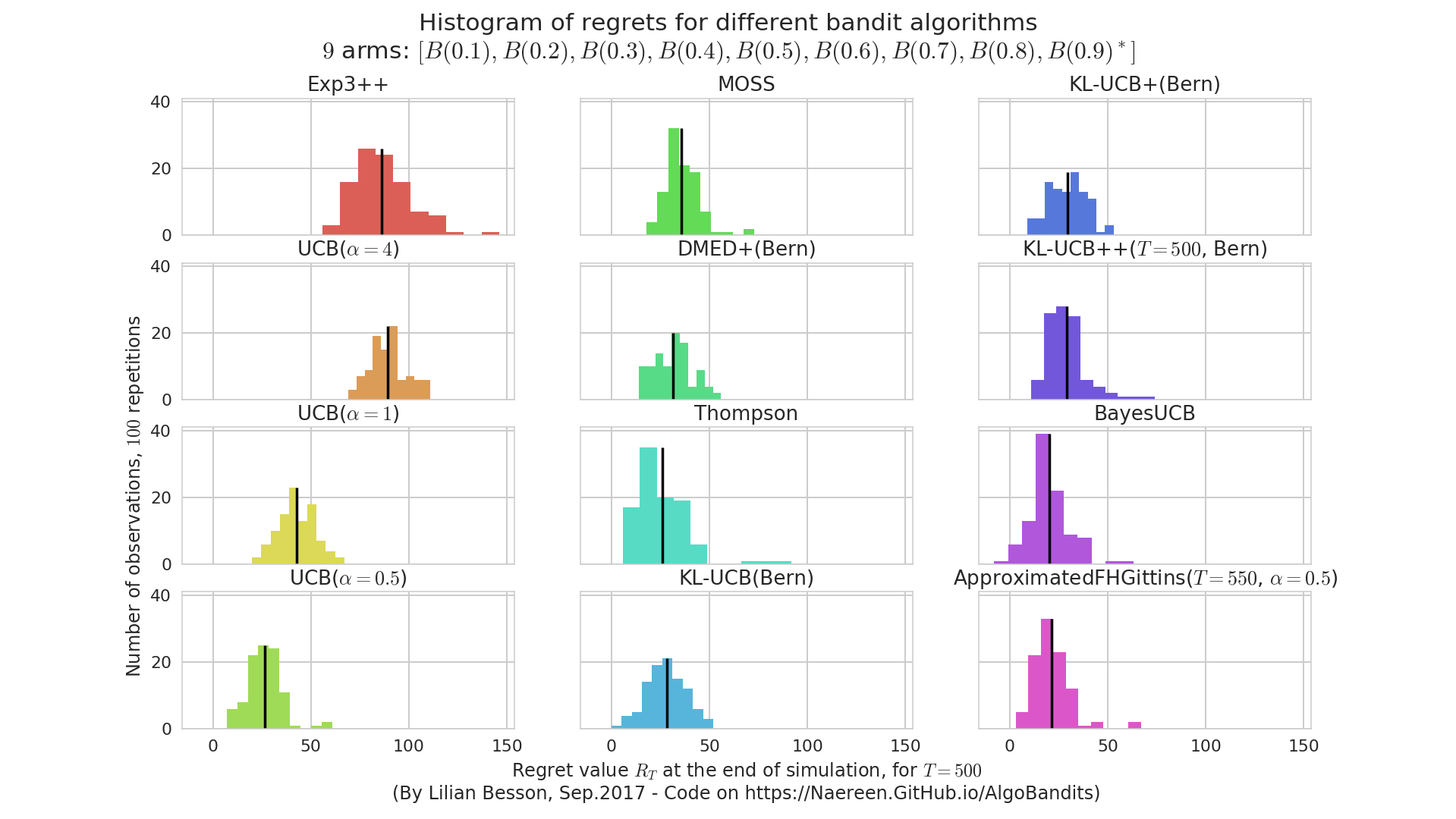 It helps a lot to see both the mean value (in solid black) of the regret, and its distribution of a few runs (100 here). It can be used to detect algorithms that perform well in average, but sometimes with really bad runs. Here, the Exp3++ seems to had one bad run.

On a fixed Gaussian problem, aggregating some algorithms tuned for this exponential family (ie, they know the variance but not the means). Our algorithm, Aggregator, outperforms its ancestor Exp4 as well as the other state-of-the-art experts aggregation algorithms, CORRAL and LearnExp. 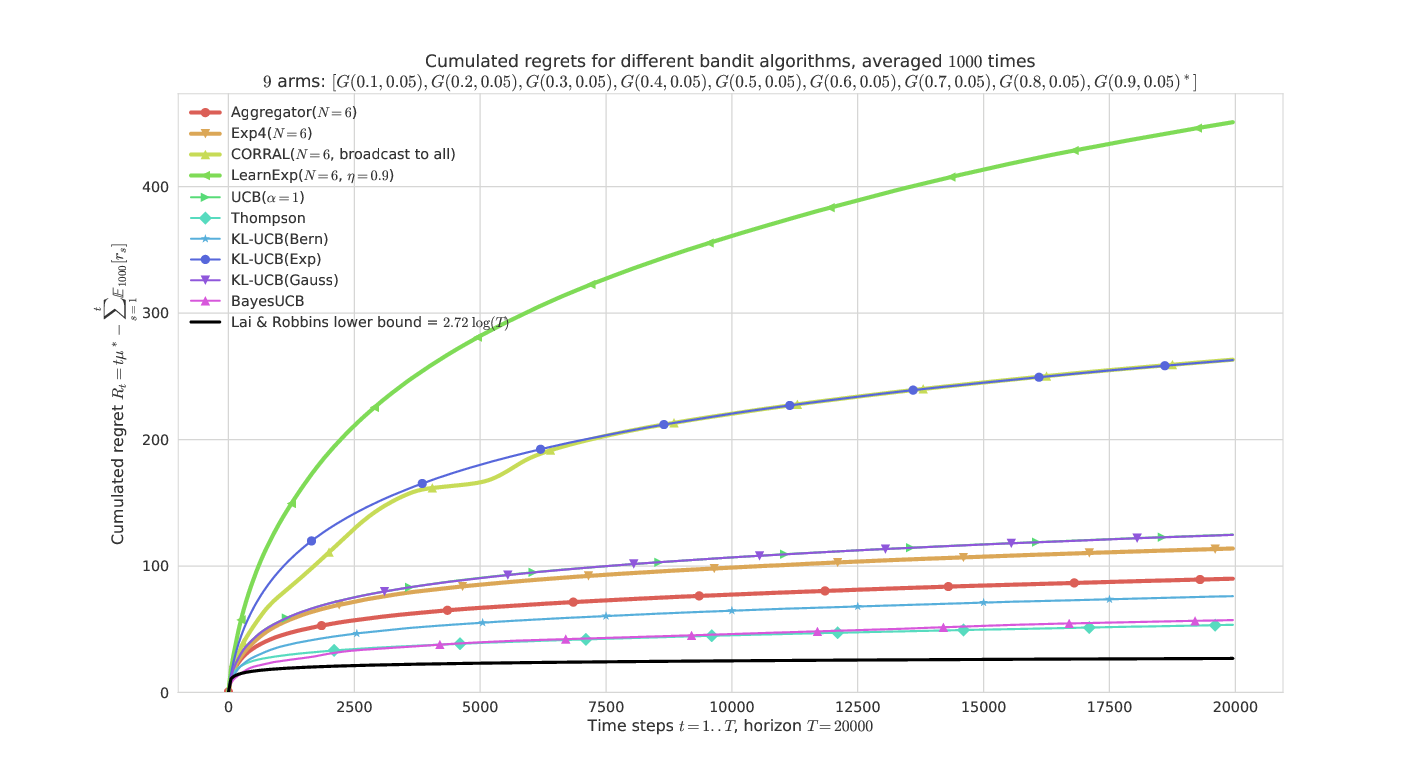 Regret plot on a random Bernoulli problem, with M=6 players accessing independently and in a decentralized way K=9 arms. Our algorithms (RandTopM and MCTopM, as well as Selfish) outperform the state-of-the-art rhoRand: 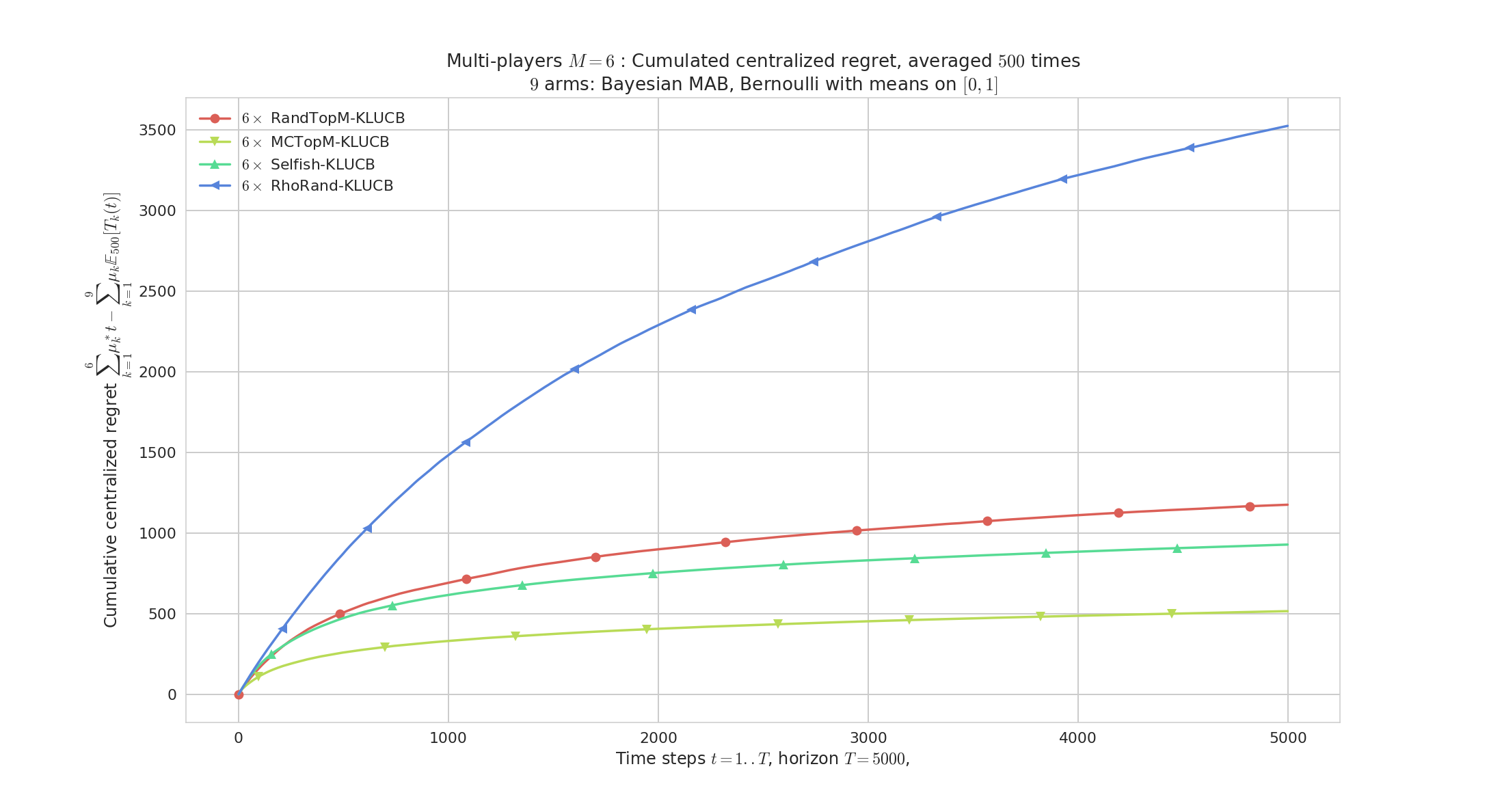 Histogram on the same random Bernoulli problems. We see that some all algorithms have a non-negligible variance on their regrets. 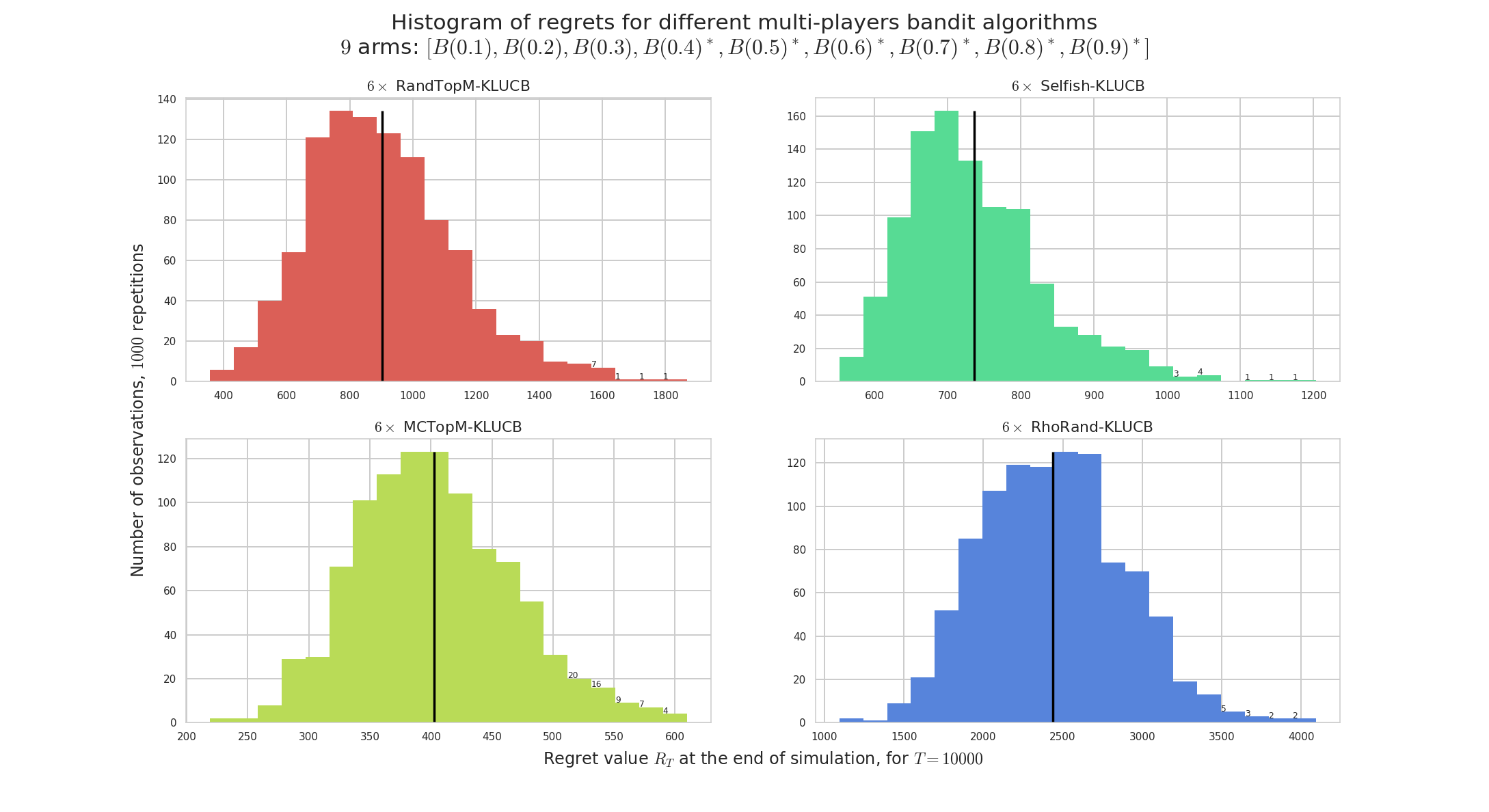 Comparison with two other “state-of-the-art” algorithms (MusicalChair and MEGA, in semilogy scale to really see the different scale of regret between efficient and sub-optimal algorithms): 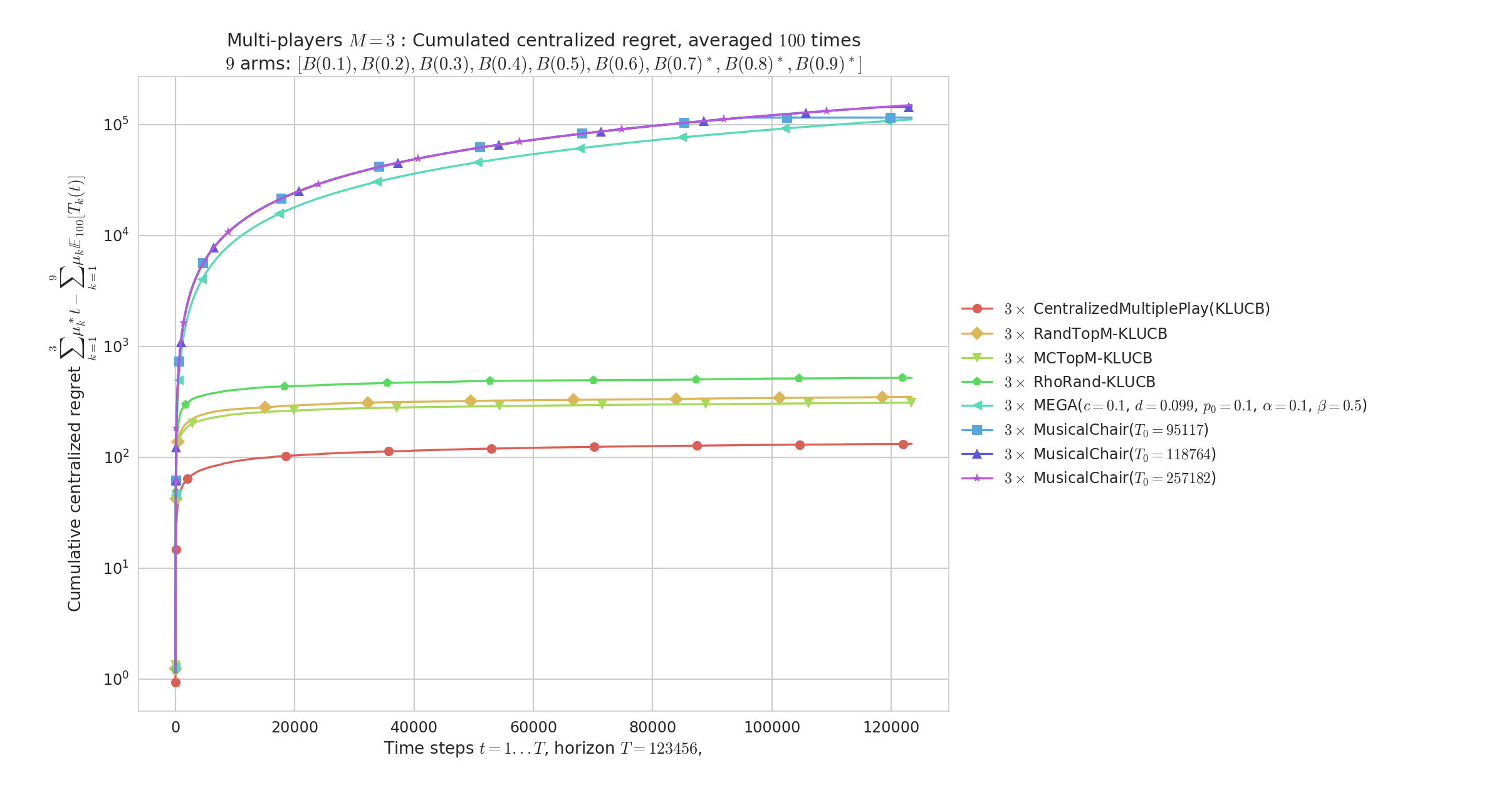 Comparing Sliding-Window UCB and Discounted UCB and UCB, on a simple Bernoulli problem which regular random shuffling of the arm. 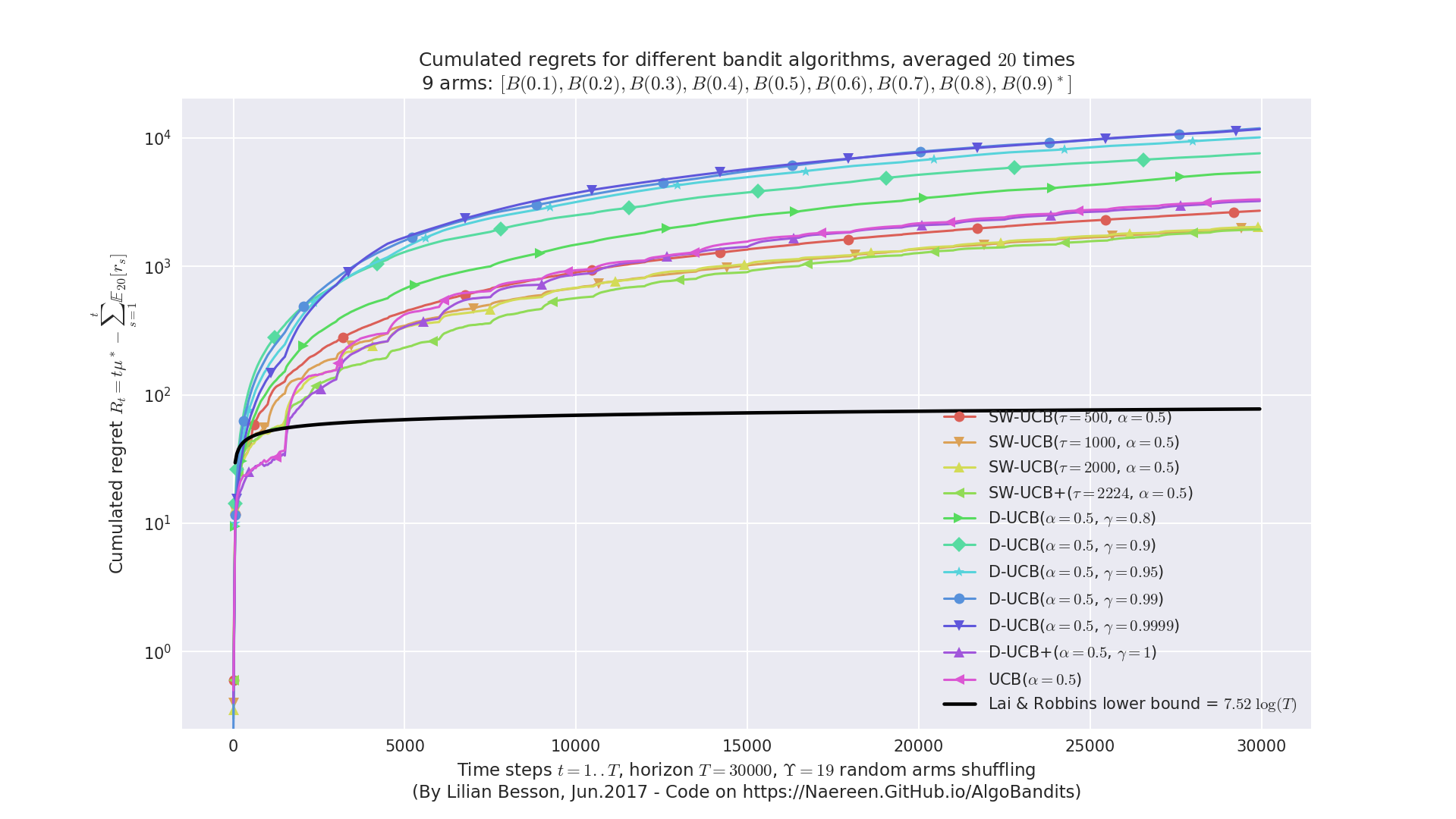 Comparing regular UCB, klUCB and Thompson sampling against “sparse-aware” versions, on a simple Gaussian problem with K=10 arms but only s=4 with non-zero mean. 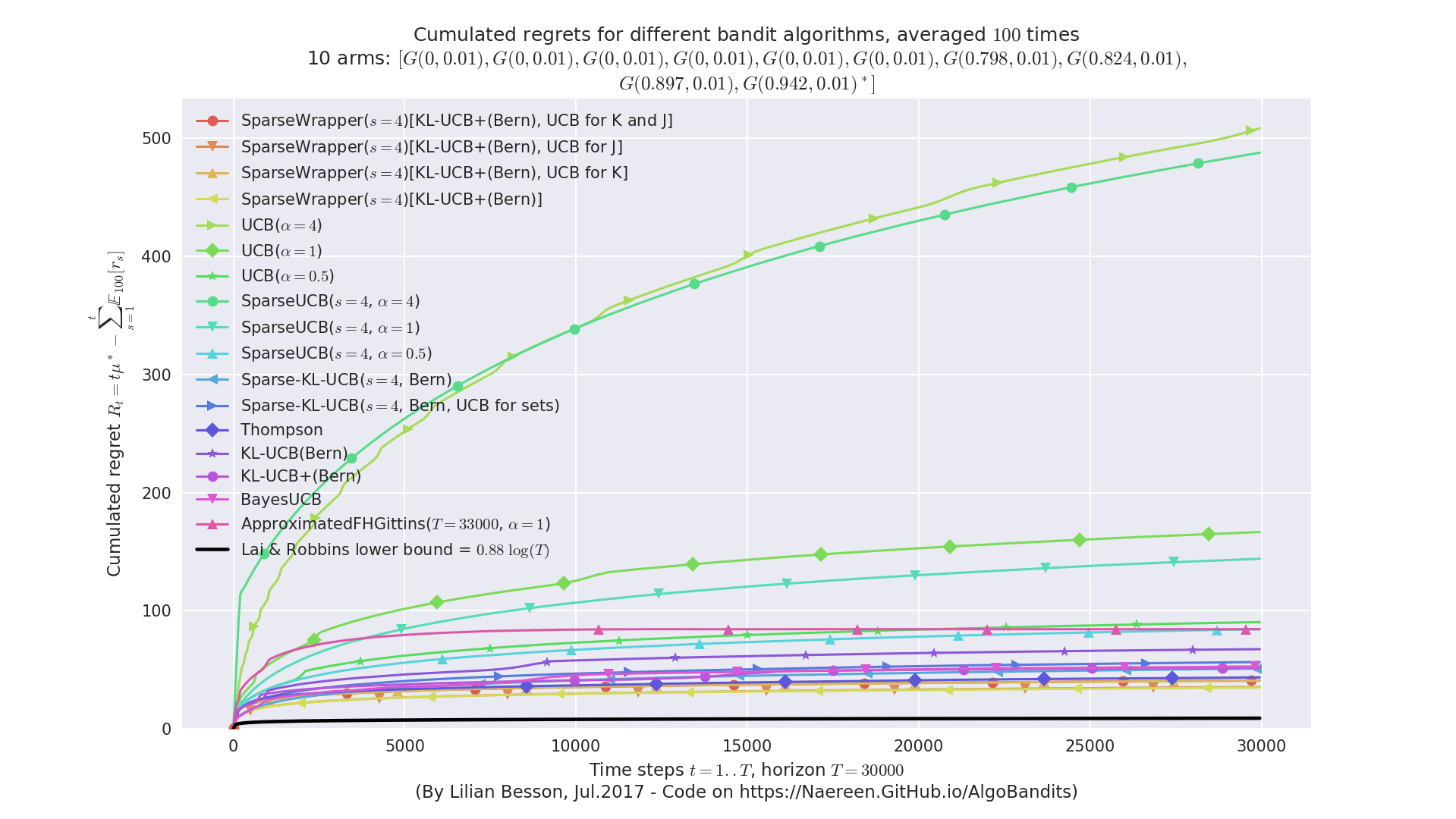 Demonstration of the Doubling Trick policy¶

In the JMLR MLOSS paper I wrote to present SMPyBandits, an example of a simulation is presented, where we compare the standard anytime klUCB algorithm against the non-anytime variant klUCBPlusPlus algorithm, and also UCB (with (\alpha=1)) and Thompson (with Beta posterior).

Running this simulation as shown below will save figures in a sub-folder, as well as save data (pulls, rewards and regret) in HDF5 files.

Example of a single-player simulation showing the average regret and histogram of regrets of 4 algorithms. They all perform very well: each algorithm is known to be order-optimal (i.e., its regret is proved to match the lower-bound up-to a constant), and each but UCB is known to be optimal (i.e. with the constant matching the lower-bound). For instance, Thomson sampling is very efficient in average (in yellow), and UCB shows a larger variance (in red).

Note: HDFCompass is recommended to explore the file from a nice and easy to use GUI. Or use it from a Python script with h5py or a Julia script with HDF5.jl. 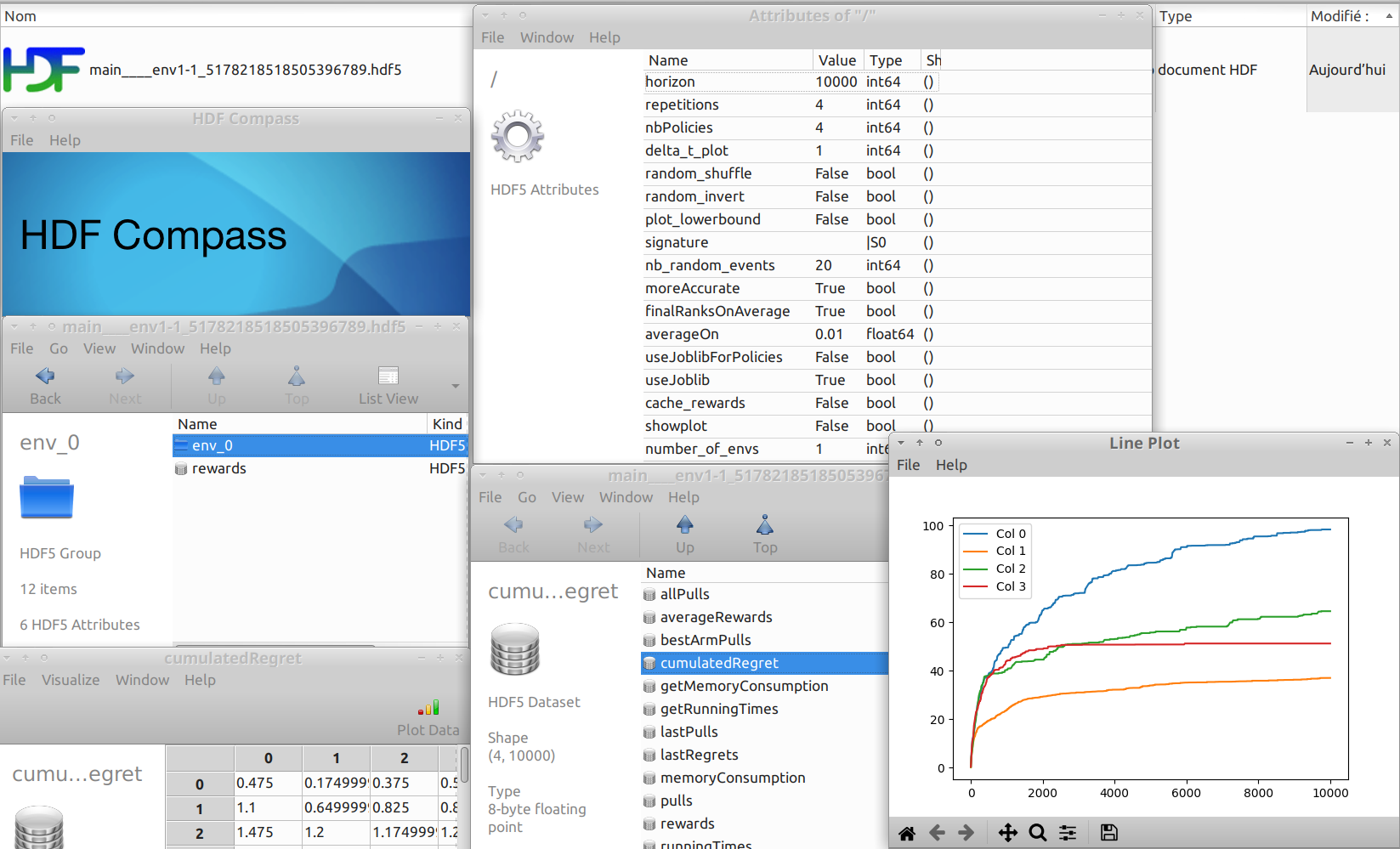 Graph of time and memory consumptions¶

Note that I had added a very clean support for time consumption measures, every simulation script will output (as the end) some lines looking like this: 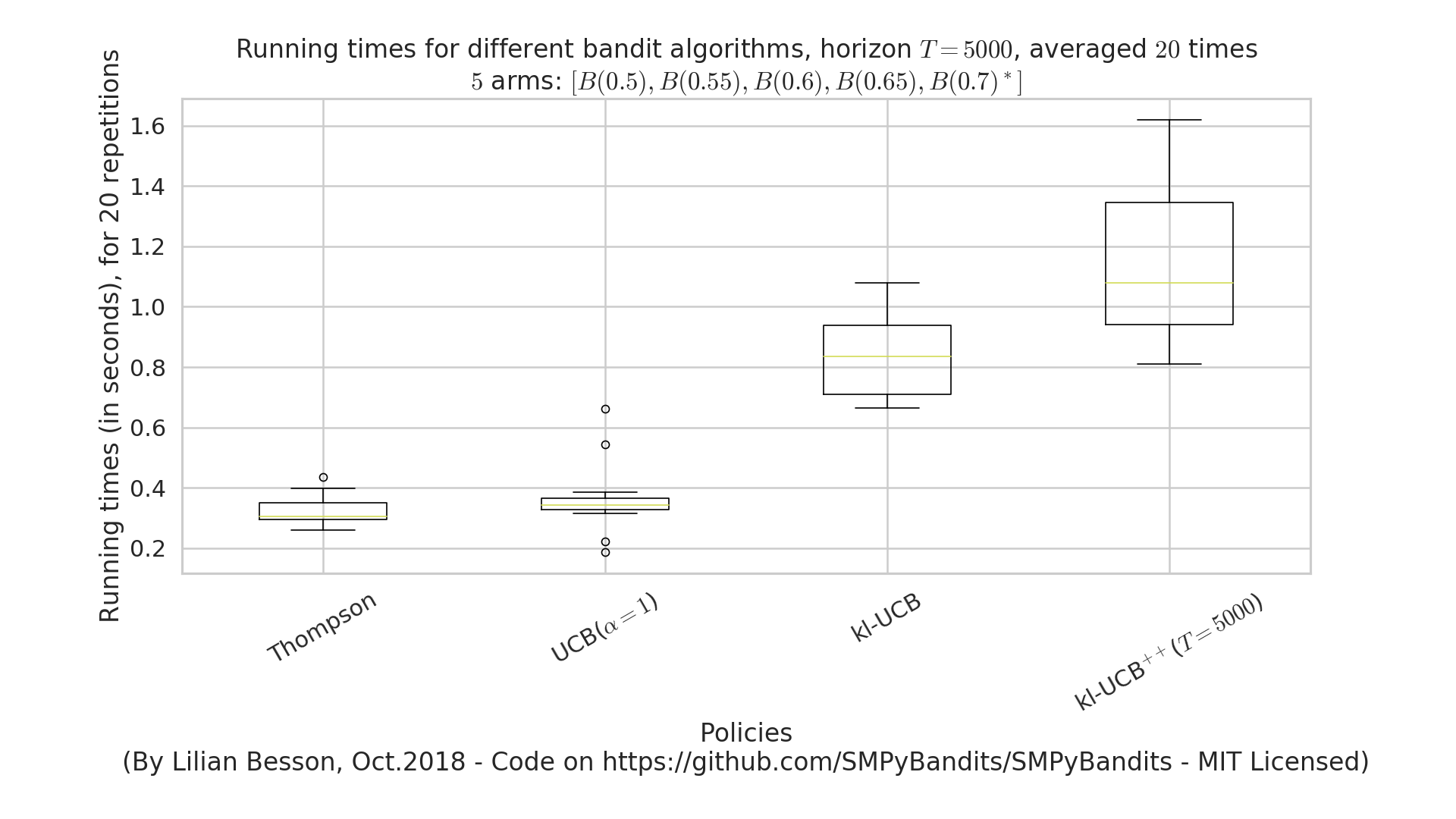 Note that I had added an experimental support for time consumption measures, every simulation script will output (as the end) some lines looking like this: 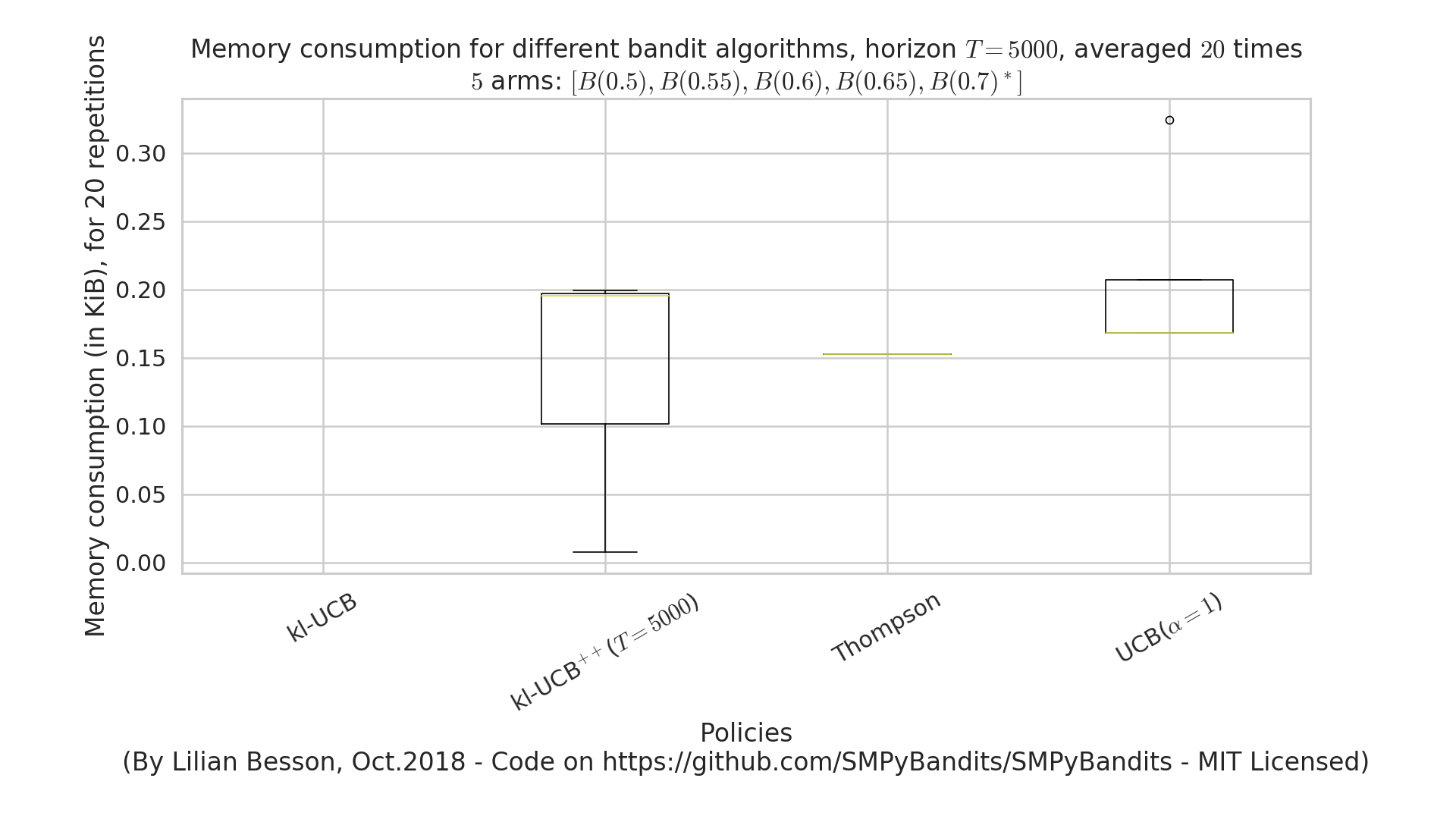 It is still experimental!